Seth Bridge’s stomach was somersaulting, full of butterflies. His brain was spinning as if he’d had a beer too many. But no, his knees were suddenly weak because it was that time of the week and the Ladies were expecting him in three minutes’ time. He turned into Mayfair Lane, his pulse redoubling, and climbed the steps between the gilt topped railings. He hesitated to calm his breathing, and rang the bell.

The door opened and his hair flattened across his scalp. Miss Amanda’s blouse was in chocolate caramel satin – a soft pussy-cat bow draped on her lovely breast. Her lips didn’t so much smile as accuse. He was a naughty boy for coming to see her again, her and the other Blouse Ladies. She widened the doorway and he crept past, entering the perfumed world of Maternity Blouse.

Miss Amanda’s mini skirt was white, with a huge fashion belt. She led him across the tiles in  her dark stockings and white heels, and sat at the small, marble-topped reception table, a chair for her and a chair for him. Her nails were cherry, like her lips, as she gathered the pen from its stand. “What is the purpose of your visit?” she asked, her thin lips pursed and business-like.

Seth was used to the pantomime - humiliating by design. “I want the Ladies to dress me. Please.”

Her lips were parted so he heard the tut. “So start again.”

“I want the Blouse Ladies to dress me, please, Miss Amanda.”

She looked at the dainty gold watch inside her wrist and wrote, voicing the entry in the visitors’ book. “Cutipanties arrives at 2pm and wants the Blouse Ladies to dress him.” Her lashes sprang up and she looked into his eyes. “What do you want to wear? Look at me and tell me.”

Seth’s chest was tense as he looked into her hazel eyes. “C-C-Could I w-wear a nice dress please? And a b-bonnet, and –”

A door closed behind him and heels clacked slowly towards them. That citrus perfume could only be Mistress Jesamine, as Seth told Mistress Amanda what she wanted to know. “A-A white petticoat – a sus-s-spender belt and s-stockings -” He was aware of Mistress Jesamine’s white blouse beside him, her silk bow ribbons almost against his face – “and hi-i-igh heels, please.”

Mistress Amanda wrote, then looked up at her dark haired friend. “Cutiepanties wants us to dress him in baby girl clothes.” He dropped his gaze to see that Mistress Jesamine’s black thigh boots covered all of her dark pantyhose but the last three inches before her tight leather shorts. Her fingers lifted his chin and she looked at him down her sharp nose. He found her digit fingernail pressing at his lips. He opened, and his mouth was filled with a long, female finger.

“Suck,” she said, her voice cold. “Up, up.” Her finger lifted him and he was on tip-toe for Mistress Amanda to undress him. It was the point at which his independence was surrendered to the Blouse Ladies, and his cock knew it as his pants were undone and fell to his ankles. “Come.” Mistress Jesamine’s nose was beside her finger so that he followed her jet eye-lashes as she led him by his mouth, his legs tangled in trousers and briefs, across the hall and into the nursery. By the time he stood in front of Mistress Crystal in the dressing corner, all he had on were his tee shirt, socks and shoes. She sat looking up at him in a pink satin blouse and hot-pants.

“Hello, Cutiepanties.” She smiled with beautiful teeth, and her fingers enveloped his humiliated cock. “I’ve chosen a nice baby blue set for us to put you in this afternoon. Once you’re on your changing table, we’ll be able to play lovely girly games with you, won’t we? Up we go then.”

Seth Bridge lay in the middle of his satin cushions and whimpered with shame as he was laid back in his petticoat and dress for his bonnet ribbons to be fastened at his cheek. Everywhere he looked he saw satin blouses, their soft bows drooping over his legs, his arms his dress. “Why are they babying him?” asked Mistress Crystal, her face upside down above his eyes.

“Because he is a naughty boy who plays with his john,” replied Mistress Amanda. “I’d better check what it’s doing inside his diaper.”

“Ohhhhhh – mmmmmmmm,” gasped the baby as she pushed into the plastic lining of his pants and enclosed his cock in a soft squeeze up and down its length.

“It’s because he likes us to make him ashamed and humiliated,” said Mistress Jesamine, her fingers reaching inside his bonnet. “Suck my finger, sissy-boy, while we play with you in your baby clothes.” Her finger was strong and slender along his tongue, and he clenched it with every muscle in his mouth, sucking and sucking. His bonnet was wrapped against both his cheeks as Mistress Crystal gathered his chin in her hands. “It’s really because he is such an effeminate sissy weakling that he just wants girls in bow blouses to dress him.” She giggled as he sucked even harder and moaned helplessly as his baby pants were invaded by groping fingers. “He wants us to watch him as he turns more and more into a little baby girl.”

This was why Seth Bridge came every Friday to Maternity Blouse. It was because the Blouse Ladies understood him and they were always right.

Part 2 of Maternity Blouse next month 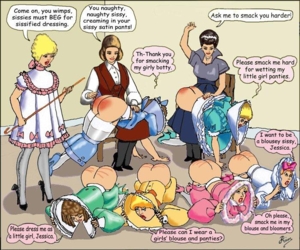 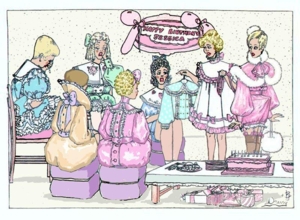 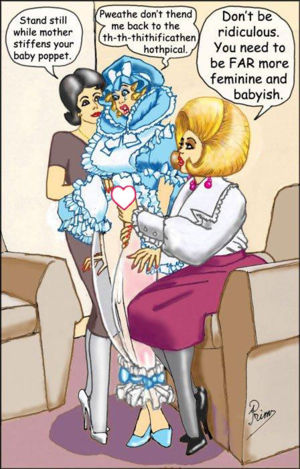 
Sign in, and send my message
outside
Sign Up
Sign In
This quote was added to your post
_original_post_reply
kay3070
Posted May 14th, 2016 ~ 12:31 pm
Hi Abby. Absolutely wonderful! Lovely story and such beautiful art work as always. Can't wait for part two. :-)
big hugs.