Hyacinth Granford stood in front of the assembly of eager faces, all of them beautiful examples of cosmetic glamour and immaculate coiffure. Fifty women who knew that their feminine perfection would weaken the men who were unfortunate enough to find themselves before them. Every woman without exception was intent on piling shame and  misery on the two wretched husbands who were to be presented to them today. For this was the Alpha Women’s Collective, gathered for their weekly male-teasing, with the added pleasure of seeing the males being made to suffer a frightening new step towards their permanent feminization and babyfication. On either side of her, Hyacinth smiled broadly at the cire satin salon capes, each with a head-enclosing satin hood, while from the hems, the black legs showing at the floor disguised the glossy pinkness of the kid-covered chairs in which sat the owners of the two pairs of high heels that everyone could see. One thing her audience could guess, from the depth of those cire hoods: their occupants were wearing large, humiliating baby bonnets.

Hyacinth called for order, and the giggles and excitement reduced to a buzz, and finally sank into the silence of breast-thrilling anticipation. The sexual glow of seeing humiliated males was about to start.

“Welcome, sisters,” she began, standing tall and slim in her elegant, forest green Chanel costume worn with amber beads and a silver brooch at her shoulder. She liked to wear her platinum hair built up for De-maling Meetings. “Today we will enjoy a little question and answer session, in which our two waiting sissy-babies will be most cooperative in revealing their most precious and embarrassing secrets to you when you ask them.” The hostess saw one or two unconvinced looks, but raised her brows and turned a reassuring look towards her doubters. “Our captives have their sissy cocklets secured in vibrating satin sheaths,” she said, turning her grin into a purse of determination. “They may think they are merely diapered and pantied for us, but they will discover otherwise when they fail to show eager obedience to their betters.”

The women laughed out loud, and even louder when Hyacinth held up the little silver remote in her hand. She turned her attention first to the cape in caramel beige, unbuttoned the front of the hood and threw it back to reveal its horrified occupant. The audience greeted him with peels of laughter and cries of “Hellooooo Sweetie!” The goggling look of his eyes was echoed in the bewildered sag of despair in his jaw.

“Greetings, Ladies, from Ian ‘PinkPotty’ Richards,” declared Hyachinth. “The sissy wants you to see how babyish his wife and his Mother-In-Law have made him. Doesn’t he look babyish in his lovely big bonnet?”

The sissy made no effort to stop his head being turned to right and left in her hands, showing the large bonnet of yellow satin he was wearing with a deep border of white frills. After everyone had laughed long and loud at the pathetic, bonneted face, Hyacinth turned to the widely spread cape in magenta pink, beneath which everyone could see a pair of blue high heels spread out to either side of the chair beneath. Every female throat tensed for more hilarity as the buttons were undone up the front of his hood, then Hey Presto, a wretchedly unhappy face was revealed, this time surrounded in a violet baby bonnet lined with white satin, and framed on either side with upstanding dress collars of stiffened white organza. His ridiculous appearance brought the audience to their feet in loud applause, and of course in gales of laughter.

“Girls,” cried their hostess, urging everyone to be seated, this is Clive Hastings – or ‘FrilliKnickers’ as he is known by his wife and her female friends at work.” She leaned forward to look in at him inside his collars and bonnet. “You’re a bit red in the face, dearie,” she told him; “are the Ladies embarrassing you?”

Her words brought no reply – just a drop of the bonnet in an effort to hide his face.

“I’m asking you a question, FrilliKnickers, so I want an answer.” She paused, waiting, then showed her audience that she was consulting her remote and – pressing a key.

The room dissolved into shrieks and cheers as the women congratulated each other at how superior they were over males like this one. “Quite effective eh?” cried Hyacinth over the hullabaloo, and the clamour gradually subsided for her to explain. “It’s not pain that his sheath inflicts, deep down there inside Baby’s diaper - oh no. But it is VERY SERIOUS sensations, bringing him to a state of unwanted arousal. It’s called the Phallic-Buzz-Tunnel, or PBT for short, and they will be on sale during the coffee break while we are changing these two precious wimps for their later little trials on the changing tables.”

Her words met with a buzz of enthusiasm, but everyone’s attention was quickly seized as their hostess removed one cape after the other and the sissies were revealed in all their babified glory.

“Shall we ask little PinkPotty some nice questions first, Ladies?” she said, standing over the wretched Ian Richards in his dress of lemon satin, his arms buttoned firmly onto the raised arms of his seat and his knees splayed to the sides to reveal his sweetly printed plastic baby pants. “Say hello to the Ladies, PinkPotty.”

The sissy was fastened in a half-sitting, half-lying attitude so that his bonneted face looked particularly pathetic and helpless. He was very close to tears, but that was no excuse. Hyacinth gave him a prolonged buzz, sparking life and endeavour into his blushing face.

“Ohhhhhhh! hello-o-o-oooo – Hello Ladies,” he blurted, his knees showing that he would have kicked and wriggled for all he was worth if he could, but as it was, all he could move was his bonneted face as he surveyed his audience in panic.

“Do you like the nice feelings inside your diapers, PinkPotty?” cried one of the audience.

The air hung expecting his answer, which didn’t come – and another shot of encouragement sent his bonnet and knees into another burst of energy. “Aaarrrgghhhh! It’s bu-u-u-uzzzingggg – in my diapeeeeee!” he wailed, and he turned his miserable face up to Hyacinth for some kind of rescue.

“Tell the Ladies what they want to know then, PinkPotty, and your diaper wont buzz you any more. It's up to you, darling.”

He looked shattered, aghast at it all, but the questions came and he had to answer. “Why is your name PinkPotty, sissy?” – “Because I sit on a little pink potty with Barbie on the front.” “How long do you have to sit on your potty, dearie?” – “Until I do wee-wees or biggies, ma’am.” “Do you wear your lovely plastic baby pants to go out in with Mummy-In-Law pushing you in your buggy?” – There was a hesitation, too long, and – “Aaaarrrggghhh! Yes – Yes – Mumsy takes me round to her f-f-friend’s house to – to give me my drinkies!”

The women enjoyed his agonies of exposure, until Hyacinth turned to her other sissy. “We don’t want to leave you out now, do we, FrilliKnickers?”

The sissy hung his head between his lace-edged collars, fearing the worst. But he was supposed to give an answer. “Aaaahhhhh! Ohhhhh, ohhhh no! Don’t miss me out – please.” Tears of shame ran down each cheek and he looked at his audience to see each woman who had a question for him. “Does your dress button shut at the back, honey?” – Y-Yes, Ma’am, and it has a pretty bow too. I-It’s lovely.” – “Do you like being a baby for all your wife’s friends?” – He thought about it, and “Aaaahhhhhhhhh! Oh no, ma’am, n-n-no I get f-f-frightened, when the girls undo my d-d-diaper and – and they play with my little poppet. It’s n-n-not fair!”

The Women’s Collective laughed and laughed, and played with their own panties a good deal while they were enjoying the humiliation of their captives. “I think PinkPotty is evidently trying to hold himself,” observed Hyacinth from the deeper shade of red on the sissy’s cheeks. “Is it a wee you’re trying to do, Sissy? Or are you trying to cream?”

Ian Richards wasn’t so much trying to stop as trying to reach the orgasmic climax he was yearning for in his diaper and baby pants. A buzz of  the Buzz Tunnel alerted him to what he had been asked. “Ohhhhhhhh, I want a – a – a sissy jerk off, ma’am. I’m so clo-o-ose – if I can just – ”

The women fingered themselves with delight. “Do your creamies, petal,” cried one of them. “Squirt into your baby diaper for us,” cried another. A further burst of buzzing sent his knees into fits of wriggles, and his bonnet flopped with delirious pleasure into one side of his collars, then the other. “Here it comes!” came the cry from amongst the sizzles of taffeta and squeaks of leather skirts round the hall, as the sissy moaned and drooled with long wriggles in his chair, until he collapsed, exhausted, his mouth lolling open and dribbling onto his dress.

It meant that the ladies could turn their attention back to Sissy Baby Clive – who knew only too well that they were now going to spend all their time on humiliating him.

This story and image are in the Wendyhouse at www.primspetticoatwendyhouse.com 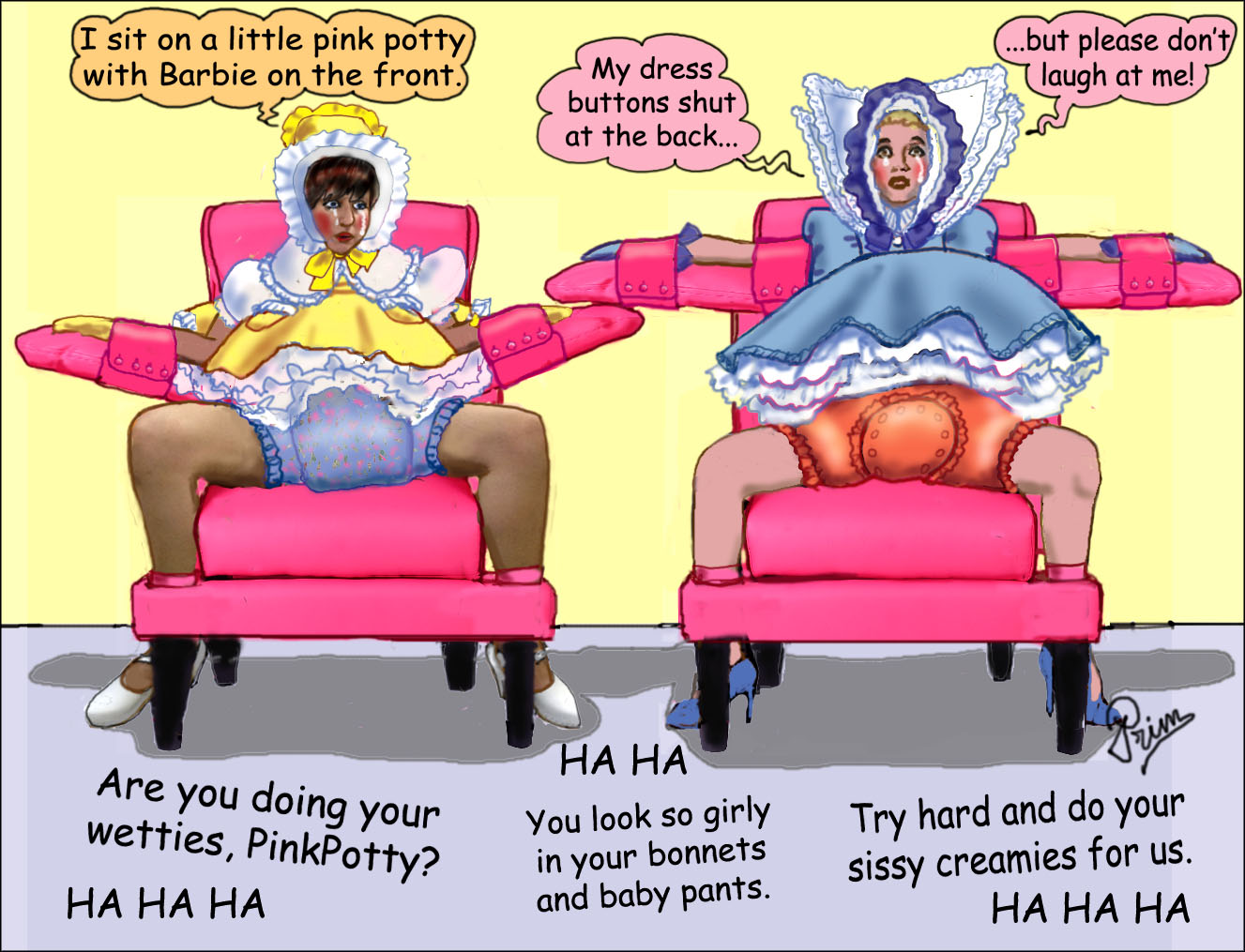 
Sign in, and send my message
outside
Sign Up
Sign In
This quote was added to your post
_original_post_reply
Selected! This post will show up in your reply's message.
De-selected! This post was removed from the quotes in your reply.
Saved!
Delete this post
Can you say the reason why you are deleting? Only the moderators will be able to see the reason you give.
10000
OK
Cancel
0
Tags:
adult babies
sissies
forced feminization
age regression
baby dresses
petticoats
panties
diapers
plastic panties
dominant women
Categories:
Adult Babies
Diaper Lovers
Bondage
This quote was added to your post
You need to be signed in to
add this to your favorites
This was added to your favorites
This was removed from your favorites