It turned out to be sissy Frankie, Elizabeth Cheddley's businessman husband who was just home from the city. He may be a bit of a hit in the boardroom, the girls all knew, but they had seen him many times with his wife, and she kept him in girly little sundresses flaring widely from his armpits over bulky petticoats, and ruffle-butt panties to keep him in line at home. He was just the sort of material the visiting artists were going to love.

"Please welcome Imogen Barnshaw and Corinne Eldon to our group," said Margaret as she introduced them to the Group: "they have breast-fed sissies internationally from Moscow to Madrid, and are here in Vaginaville to complete their tour. They tell me their milk is laced with Baby-Girl Nine, the hot new hormonal mix that weakens maleness and strengthens girliness." These words were met with a storm of applause and a lot of giggling from the sex-hungry females on all sides who wanted Frankie Cheddley well and truly reduced to sissyish babyhood. As Margaret took her seat, the two visitors mounted the platform amid hearty applause: Imogen wearing a little white blouse in ruffled satin, with a cute pink, pleated mini-skirt, while Corinne wore a blue silk blouse with waterfall ruffles on either side of her blouse buttons, and a tiny, black leather micro-skirt that showed a lot of her panties. Both the girls were very heavily endowed in the mammaries and evidently capable of a lot of breast feeding during today's session. They had that adorable baby-care smell about them which the members knew from the maternity store and the sissy-baby clinic they all frequented for their amusements. A moment later, and the doors from the clinic opened and Frankie Cheddley was brought in by two large women stewards, wriggling in his little peach dress and petticoats and with a pair of white silk panties over his head. His struggles meant the women led a wayward, meandering course across the floor, but they stumbled him up onto the platform, and soon his panties were pulled off.

He got the picture in a moment of horror. A hall-full of excited looking young women, two more very well endowed women sitting waiting for him, and what the lady doctor had told him a few moments earlier while being given his baby drink. "No! No," he cried: "don't feed me that girly milk! Elizabeth, where are you. Don't let them feed me, for God's sake. Oh please don - gug - gnnnnnghhh! - nnnggghhhh!"

He was pacified with a giant dummy, which Margaret had provided and now fastened behind his neck to shut him up. He was brought to his knees to wait his fate while the visitors gave a little talk.

"Let me explain," began Imogen, "why we change babies for tit feeding: we want the sissy baby to feel rubber lining next to his skin, and we want him secured for uninterrupted sucking. We can't have babies being independent-minded now, can we?"

There was a swell of "No-o-o-ooo," from her grinning audience.

"Corinne is showing you the satin bubble-romper that we recommend for effective babyfication. It doesn't have to be in satin: there are many nice prints with duckies and kittens and Barbie princesses, but satin is essentially a feminine fabric which reminds the baby of his desire to be dressed in feminine baby-clothes. The important thing about the latex bubble romper is its lining, in pure Siamese rubber. The latex rubber lining will be next to his skin in every part of the romper, adding fetish stimulation to his sexual drinking."

Her audience stirred again with enthusiasm for all she said, their eyes flicking from girls to Frankie and back, knowing that the meekly dummied businessman was about to be dressed in the bubble romper to add to his miseries.

"Without losing any more feeding time," said Corinne, "we'll get our babykins here undressed and put him into his nice romper ready for breast-feeding."

A look of panic filled the sissy's eyes as the girls took over from the stewardesses and got him to his feet. The worry crossed a lot of the women's minds that he would be too physical for them and cause unwanted chaos at the meeting, but it soon became apparent that he was extremely weak, almost falling onto their laps when the two girls sat down and spread him face downwards across their knees to undo the back of his baby dress.

"Baby Frankie has a lovely dress, sweetie, but we have to take it off for him - and his pettis," cooed Corinne, working the dress off over his head. It pulled clear of his arms too, and they could undo his petticoats, one, two and three, and soon he was in nothing but rhumba panties. They sat him up on Imogen's lap so that he faced the audience, his pacifier bobbing with frantic sucks and "Mmm-mmm-mmm" sounds expressing his resistance. He tried to hold onto his panties but Corinne worked them down his thighs and off his feet. They parted his legs and held them wide to show his genitals to the audience.

What an autburst of laughter it produced: from being flaccid only moments before, being undressed by the girls had brought it almost upright, and it measured a modest two, two and a half inches in length, with comparable thickness.

"Frankie has a delicate body as you can see, everyone," said Corinne, squeezing pinch-fuls of soft, hairless flesh here and there on his torso and arms, "a babyish botty, and a very small popsicle. We're going to put him into a pair of his wife's stockings so that while we feed him, he associates her with the lovely, sissy, baby feelings he experiences while we feed him."

They put him into a white suspender belt and drew the fully fashioned stockings up his legs as he quivered and moaned in Corinne's arms. By the time he was fully stockinged, his popsicle was as upright as it was going to get. Next, Imogen picked up the satin, latex-lined romper and unwrapped it from its plastic dress-bag.

They put him straight into it, feeding the panty over his feet and sliding it up his stockings. The panty was elasticated at the tops of his legs, with buttons between his legs and more buttons at the back of the panty. The rest of the romper was drawn up for his arms to go through the arm-holes.

"The bubble romper buttons down the back," explained Imogen turning him onto his side to show the opened back and the buttons that they were about to fasten for their baby. Right on cue, the sissy started crying through his pacifier as the girls laid him face down over their laps. "One of the nicest things about the bubble romper is the sleeves inside the panty," she went on, and between them the girls forced his hands through the latex sleeves at each hip, on the inside of the romper, until his hands were drawn out into view at the sides of his legs. "It just remains for us to fix his legs apart, to prevent them from interrupting your view of his genitals during feeding. He is going to show you how sexless he is becoming as we feed him." She picked up a metal frame from the floor, evidently light-weight, and fitted a shackling bracket over each of his knees, clipping them in place at the required distance apart.

The women showed their appreciation with loud "Ooohhhhs!" and "Isn't that gorgeous!" When he was fully secured in his romper and frame, the girls positioned him exactly in front of Corinne's bust and she opened the front of her blouse above his face. A large, beautifully rounded tit sprang into his view, and touched his face with its warm, maternal softness. A hum of expectancy filled the watching women, many of whom were already young mothers. The reaction of Frankie Cheddley, on the other hand, was quite the opposite. As Corinne undid his pacifier his protests were as robust as everyone might have expected.

"No! Stop them someone! I don't want to be fed the ladies' special girly milk!" Corinne turned his head towards her tit and held him with a fistful of hair at one ear while her other hand turned his cheek in an altogether more motherly softness to present his protesting lips to her nipple. She wet her fingers and moistened her whole aureole, then pulled his face onto her tit.

The insertion of Corinne's tit into his mouth distracted the sissy at just the right moment, because at his other end, Imogen was opening the gusset of his romper, just enough to fish out the stiffened little popsicle that everyone wanted to see. Strangely, his audience was equally distracted, because as they devoured the sight of his helpless little organ, they missed the sudden eagerness he showed with his mouth, because as soon as Corinne's tit pushed its way between his lips, he seemed to be maddened with a desire to suck on her maternal offering, and began slavering all over her breast. He sucked and sucked, so loudly that everyone burst out laughing, while at the same time, his cock was very clearly as fully erected as it could be - small and pathetic though that was. "That's the effect of the hormones," explained Imogen, fondling his penis in her fingertips and making sure it enjoyed lots of blissful satisfaction. As his slavering and sucking gathered momentum, the hall full of women erupted with scorn, mirth and female satisfaction. Another male was being further sissified, and would grace their meetings on many future occasions to be dressed, masturbated and babified for the amusement of the young women of Vaginaville.

This story is from Prim’s Petticoat Pansies#30 at www.primspetticoatwendyhouse.com 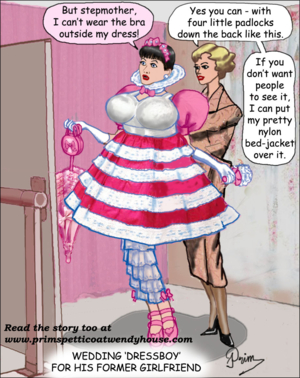 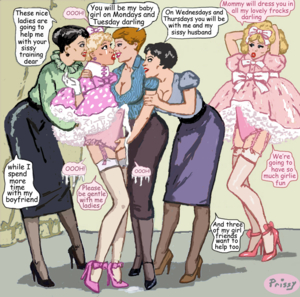 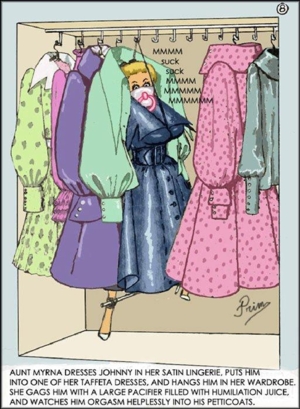 
Sign in, and send my message
outside
Sign Up
Sign In
This quote was added to your post
_original_post_reply
Baby Butch
Posted February 9th, 2019 ~ 5:45 am
Very interesting ladies club, giggles. We need more of those. Baby Frankie was humiliated nicely in front of the ladies and he liked it. The mom's milk was enjoyed.
http://sissykiss.com/gallery/baby-butchs-gallery/ 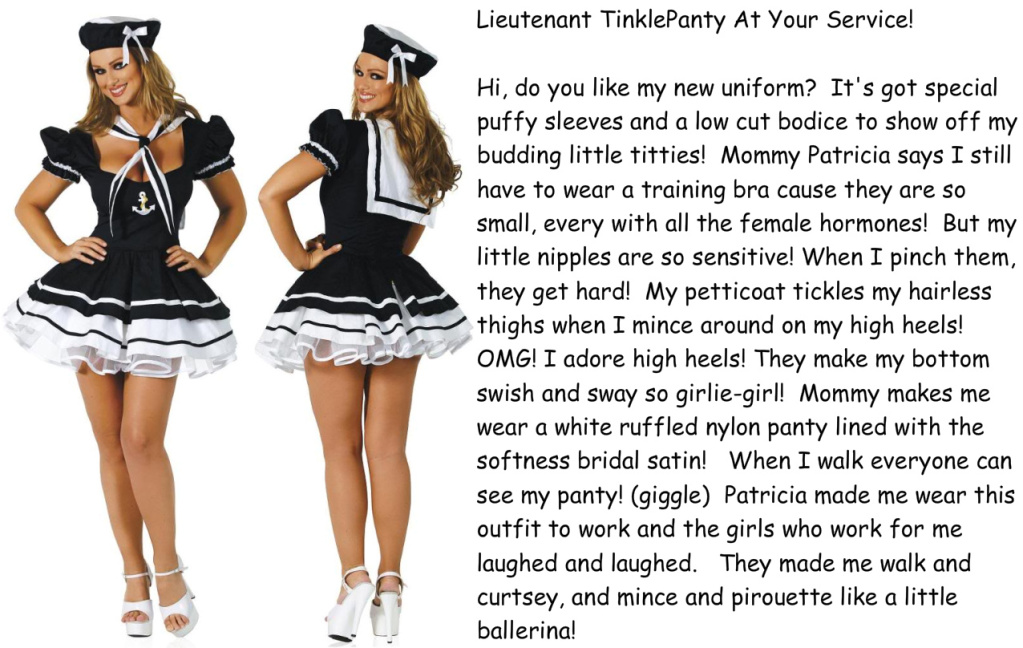